Parts to my new build

For my upcoming PC im gonna go Mini-ITX which is some of the smallest form factor you can get in a PC. Back in May, i bought a case called Cubitek Mini Cube . I chose this case for my built because of serveral things, some of them being that the PSU is at the bottom like a normal, newer atx case, and because i think this might be the smallest case you can get, that fits what i want to do. 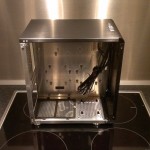 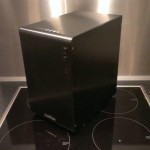 What i also like about this case, is that it is able to hold a ful length graphics card! This is not something you see that often on these kind of small cases. However when i bought it there was one thing that i didnt think about. This case has a maximum supported size of 150mm in length for the PSU. I quickly learned that this was going to be a problem, because i want a 80 Plus Gold PSU that also has enough power to run a complete water cooled setup and a high end graphics card. So basicly, such a PSU is what i have been searching for, for the last few months, but i have finally found what iam looking for i believe. The Silverstone ST75F-GS. Some might say that this PSU is overkill for a setup like this, which i somewhat agree with, but i actually dont have any other options here. There simply aint other Power supplys that meet these requirements.

Anyway, the rest of the setup is going to look something like this:

Other than that the Case obviously needs some work to fit this. Because i want to liquid cool both CPU and GPU i will need at least a 240mm rad, or 2x 120mm rads, which is what im gonn ago for. The case has out-of-the-box support for a single 120mm rad at the bottom in front of the PSU. Im gonna have to drill a hole on the front just below the graphics card, to fit the second rad. According to what i have measured, it can just fit exactly! For CPU waterblock, im gonna use the Swiftech Apogee Drive II mainly because it fints both the block it self but also the pump.. And it looks badass!